Type Redux with TypeScript without writing any types*!

Redux has been infamous lately for bringing a lot of boilerplate and ceremony, which we’ll see isn’t quite true. It really shines when you add Types to it but writing Types take time. And who has time when you’ve to ship a ton of features?

I’ve been doing some experiments on how to reduce the types, plus all third-party dependencies to something simple and yet tight.

Actions and their problems #

Redux actions are plain objects which are sent(dispatched) to the store and ultimately end up changing state via reducers. Any plain object as long as it has a type field can be called an action.

But things are not this simple if you want to make some API calls, as with each API you’d fire three different actions to handle all probable states in your app

You basically do this by using redux-thunk, and the corresponding code looks like this

There are two problems with this

We’ll cut through all of that.

As we’ve learnt type is very important in an action, so we’ll create a file and list down all possible action types. You can create multiple files too, I prefer one. 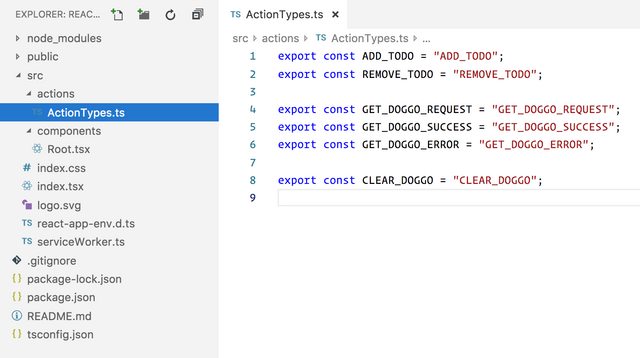 listing action types for the app

With types out of the way, we need a solid way to create actions. Doing dispatch({type: ADD_TODO, payload: 'Finish blog post'}) from your components isn’t a great idea, because it’s verbose plus your action can take different shapes, like with type someone can send payload or text — you get the drift. We need to strongly type our action object.

With this every action in the app will have a defined structure. Let’s now create a simple function to create this action object for us.

With this one can easily create actions in one line, without worrying about the structure and TypeScript will automatically pick up the types.

Moving on to async thunk actions, which will come in handy for API calls. As I talked earlier of splitting the action dispatch logic and the actual API calling, let’s define all API calls in a separate file.

We can now use getDoggo API in one/many of our actions.

Let’s now define a function which would create a thunk action. (I’ve added extensive comments). This is without types to make it a little easier to grok. This function basically creates a thunk for you. It

With this out of the way, let’s use this to create Actions. I like to keep the action creators into a separate file of their own like in the screenshot below.

This is amazing. We have 4 action creators in the lines of just one thunk that we saw earlier. Neat!

Our next problem is to determine the action object types that will be emitted to the store once you call these from the respective React components. Because each of the action needs to be handled at the reducer an we surely being lazy af, don’t want to type all the actions by hand.

Can we infer Action objects via TypeScript? Yes, we can.

Here, we used infer and conditional types and ReturnType which were recently added in TypeScript. They take the real action object and return a union of all the Action types.

Using them is as easy as this. (See the last line of the file.) 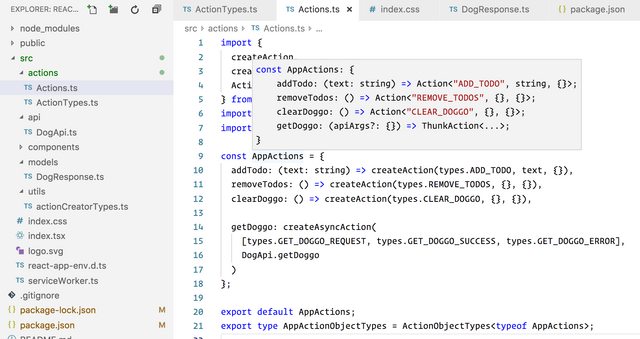 If you clearly see the tooltip in the picture the action creators embed the Action type info and instead of duplicating it inside our codebase we could just infer them. If I hover over AppActionObjectTypes it shows a beautiful list of types it inferred.

Let’s handle them in a reducer. Just to mimic a big app I’ll create two reducers one will hold Todos and another will hold Doggos and will use combineReducers 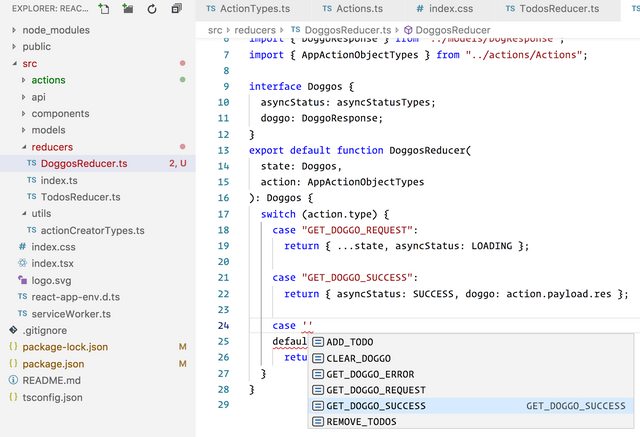 How we get excellent autocomplete on action.type! We also get correct payload types based on the Action Type.

Combining the reducers… Well, while we’re at it, we somehow also need to calculate the entire App State type which is needed by combineReducer and later in the components using connect. We already know the return type of each reducer makes up the state. Using the same info we can write a type that does this thing automatically for us.

And using it is as easy as this. 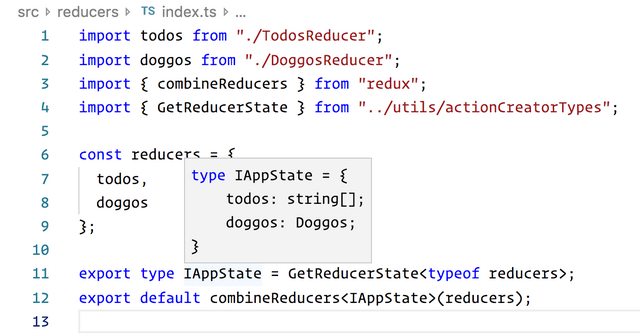 see the type extracted by GetReducerState in the tooltip

With actions and reducers in place, time to create our store.

Moving on to creating components to actually see the state in action. There are couple of things we need to take care of

Similarly, we can type all facets of our app from actions to reducers to components and all important store. I created another component which makes API calls. The typings for that are extremely similar to the above component.

Coming back to my promise of not writing any types — we’re still doing great. Because we have never defined an actual concrete interface or type. We’re inferring from already existing code blocks. Even in the component dispatch and state props are more of a boilerplate than break-your-head-over-figuring-types. All the types that we created exist in only one util file.

The code is at GitHub. And the app looks like below gif, you can see API requests for Dog images and plain actions to add TODOs.

I hope you found this approach helpful! In case you want to improve or have more ideas feel free to create an issue or hit me up on Twitter.