Crafting a PWA: Part 1 — Setting up the development workflow

PWAs have been gaining popularity for quite sometime now. Crafting a good, performant experience is continuous journey.

So before even embarking on the PWA journey, we should invest time on setting up the development workflow.

This separates great apps from apps that were great once. #

For example let’s consider a GitHub repository which has Hacker News front end implemented. This is not a PWA yet. It’s made with React and Redux.

I want every Pull Request on this repository from now on to be tested and audited for performance issues.

How do I do that? Using a CI server, like Travis. With Travis we’ll add support for lint checks, automatic stage deployments, audit using lighthouse and would be in absolute control over the changes happening on the app at all times. 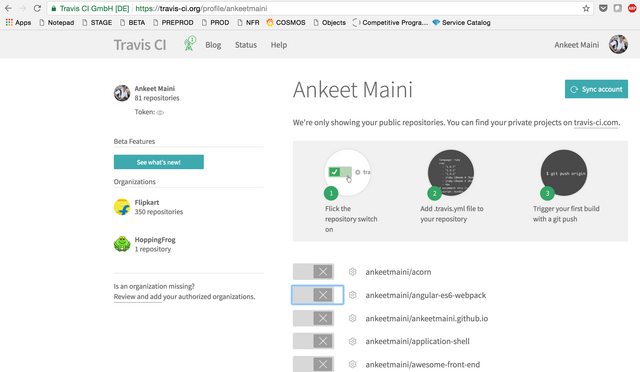 Once you enable the switch, you’d then need to add a .travis.yml which will instruct Travis on what to do at different stages of the build.

Above is a simple .travis.yml which runs lint checks on PR.

With this setup now Travis will deploy every pull request¹. You can see in the below image that a Staging deployment was done.

Congratulations!, you’ve successfully setup an awesome workflow. All the code used in the citations lives here.

[1] since free OSS plan in now can only have three active deployments at a time, you might need to manually remove deployments using now rm id

[2] right now the lightousebot will only post a comment and not fail your PR because of insufficient rights on the repository, the above screenshot which shows failing of my PR is because I’ve run a separate instance of lighthouse-ci for demo purposes. See this issue for more details